The main element of the kitchen, whose walls were plastered and painted with a decorative roller, is definitely the brick stove or špohert made by Tiziano Sivilotti of San Daniele del Friuli. The stove was turned on for the first time on 23rd April 2015, the day when we remember St. George. All around the stove we have placed the traditional furnishings of the traditional Resian house from the late 19th and early 20th century.
Next to the stove we find an elegant bench / klup with slatted backrest from San Giorgio / Bila on which there is a wooden headrest / zglawje. When you will sit on this bench you will live and enjoy life experiences of the Resia Valley. Under the small window and along the wall runs the beautiful wooden shelf / pulica from Rawni near Stolvizza / Solbica, onto which antique plates, glasses and cutlery are stored. To the shelf we have fixed a set of six iron hooks with five small copper coffee pots from Stolvizza and a small copper pot for cheese from Idrsko near Kobarid in Slovenia. Under the shelf there is a small table / miza with peculiar legs, coming from Oseacco / Osoane, while under the larger window there is the case / bankić, which contained the grain and flour. Next to it stands the blue sideboard consisting of two parts: the upper contains several coffee cups and comes from San Giorgio / Bila, while the lower one comes from Stolvizza / Solbica.
Above the sideboard, through an old wooden radio you can hear the voices and sounds of the Resia Valley. 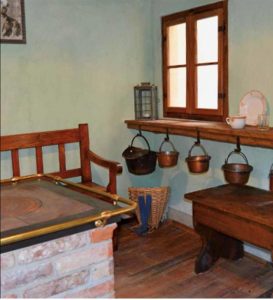 We have reconstructed a traditional bedroom with some pieces of furniture and objects that mostly date back to the late 19th or early 20th century. The entire room, including the ceiling, is plastered, painted and decorated, as originally, with geometric and floral motifs. Before the restoration the same motif of the walls was repeated also in the central part of the ceiling.
This element, which was unrecoverable, was replaced by a painting depicting the Madonna and Child Jesus, which existed before the earthquake of 1976 in another house in the part of the village called ta-par Jelani Karnelavej. Next to entrance, on the right, there are an iron washstand with three feet supporting a chamber pot / bokal from Prato / Ravanca, a basin / skleda and a jug from Stolvizza / Solbica.
Below the painted bridal chest from Prato / Ravanca, which in the median area of the facade has a diamond-shaped figure with the letters A and L inside, there are the linen bridal clothes that come from Gniva / Njiwa. Next to the bed there is a painted cradle that comes from Stolvizza / Solbica.
The nuptial bed is from Prato / Ravanca and presents polychrome decorations with floral motifs. On it there is a straw mattress, filled with bags of corn, and covered with linen sheets and a wool blanket. All these elements come from Stolvizza / Solbica. On the headboard are painted the letters A and L (Anna Lettig Ojawcawa).
On the inside of the wooden window sill there is a sewing machine from Uccea / Učja. Opposite to the bed there is the shelf for the clothes that comes from Stolvizza / Solbica. On the walls are hanged a picture from the shrine of Monte Santo / Sveta Gora near Gorizia, a picture depicting the Crucifixion from Hostje and two fonts in china from Stolvizza / Solbica.
On a stool from Coritis / Koritu there are a devotional booklet, a pair of glasses, a rosary and some old photographs that recall the life in the past centuries in the Resia Valley.
Above the washstand, through the mirror, you can hear prayers and songs in Resian. 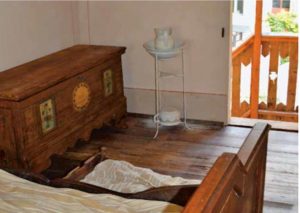