The Museum of the resian people is located in Stolvizza/Solbica in the Resia valley in the Friuli Venezia Giulia region. 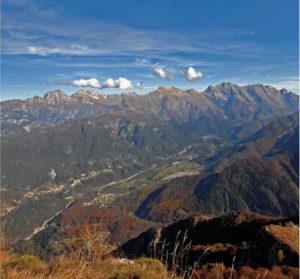 When you were approaching this valley, you definitely noticed the majesty and beauty of the mountains, especially Mount Ćanen / Canin (2587 m) in the east, from which originates the stream Resia / Bila or Vilika woda that runs through the valley and flows into the river Fella near Bila / Resiutta.

To the south the mountain chain Muzac / Musi (1800 m) stands out, one of the rainiest areas in Italy. Its peaks have an interesting feature: the profile of the Sleeping Beauty / Ta lipa ka spi. 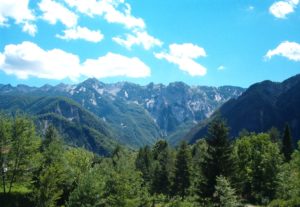 The museum is located in a typical old house, the Buttolo Ploc house. 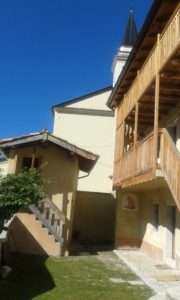 The first documents that mention the name of an individual village of the Resia Valley date back to the 13th century. The oldest (an urbarium of 1240), where for the first time the name Resia is used, describes, in “Census in Resia superiori”, for each village of the valley the number of farms existing at the time: San Giorgio / Bila had 12 farms, Oseacco / Osoane 6, Stolvizza / Solbica 3, Gniva / Njiwa 2, Prato / Ravanca 1.
These farms referred to the farmer called massarius and his family, that could consist of many members, and represented the cell of the rural economic structure of feudal type. From these individual farms over the centuries developed a complex urban fabric that, as regards Stolvizza, has its origin in the part of the village called, in Resian dialect, Ves (village).
A part of the village, i.e. the part located at ta-na Worte, was hit by a violent storm and subsequent flood of the Suhi Potok / Rio Secco, west of Stolvizza, which in 1746 eroded the slope and caused a landslide. In addition to the houses, also the village church built in 1628 and dedicated to St. Charles Borromeo was destroyed. The church, as documented in a manuscript dating back to 1642, was placed “at the foot of the village”.
After this storm, the church was built in a safer position and a new unit of the village, called Les, began to form. The foundations of the church and the new houses were built on the rock.
In the mid-eighteenth century, the village suffered another disastrous event that is well documented in a chronicle dated 21st July 1755 of Andrea Cos, parson of Resia.
On that day “in the evening, during the Ave Maria” Stolvizza “was set on fire by lightning, which fell over the house of Antonio Negro said Hoisca“. This fire spread rapidly and “within an hour” the whole village was set on fire.
From the same note, we learn that “the village of 87 buildings”, which were covered with straw, was completely destroyed by the flames and that “the villagers had no time to take away most / any piece of furniture, so that these poor people are deprived not only of their homes, but their objects too”. So the villagers no longer had homes and remained with almost nothing.
It was in this period, i.e. after the two tragic events that, for the most part, the new buildings of the village were built in the areas of Kikej and Les.
From a Venetian letter, dated 19th November 1755, we know that a first instalment of the financial help was granted to the population of Stolvizza / Solbica by the Venetian Senate.
This contribution was granted to the families for the reconstruction of the houses, the enlargement of the church and the purchase of a bell.

The renovation of the house

The renovation of the old Buttolo Ploc house, which marks its 260th anniversary of construction, were carried out in two parts between 2015 and 2016.
The direction of the works and the project were entraste to the surveyor Fabio Zanella aided by the engineer Fabrizio Cacitti and the valuable contribution of the architect Donatella Ruttar.
The first site started on Wednesday, 21st January 2015, the day when we remember St. Agnes, whose life-size image is located in the adjacent church of St. Charles Borromeo. The first works comprehended the reconstruction of the small building in the courtyard and the restoration of its retaining wall.
The two rooms, which still feature the original wooden window and door frames, with the exception of the small window at the entrance, were totally recovered and destined for our permanent ethnographic exhibition.
Within this small building, in fact, we have reconstructed two typical environments of the Resian house: the rustic kitchen and the bedroom.

In the main area of the house, which consists of six rooms, we have set up temporary exhibitions using mostly the items that the museum has in its stores. Here we have also placed the permanent section dedicated to the oral heritage of the Resia Valley.
The renovation of this part of the property, which started on 1st February 2016, comprehended the partial restoration of the roof, from which we removed the brick “tiles” that have been positioned after the restructuring that followed the earthquakes of 1976 and added, in substitution, new timber and isolation. After replacing the original roof with “tile-like” tiles, we isolated the rooms on the ground floor, with the aid of a ventilated crawl space. There, where the old kitchen once stood, we found the base of a fireplace and a fragment of a stone hand mill for grains. In the next room, once used as a barn, a new window on the north side of the building toward the road was opened. During the works, which also consisted of the plastering of the ceilings and some walls, two very characteristic elements have luckily re-emerged: the old stone sidewalk toward the courtyard, which was hidden by a layer of sand covered with concrete and a nice wall painting that reproduces a smiling pig. Both elements were fully restored.
New larch railings were positioned, while the frames have been partially renovated in order to replace the old non-recoverable ones (in particular it was not possible to renovate the old windows).
Outside the courtyard, toward the road, we placed the new stone staircase with cobblestones and the mural painting on the wall depicting the storyteller Tina Wajtawa / Valentina Pielich (1900 – 1984) of Stolvizza / Solbica in the act of telling a story to some children.

The Section dedicated to the oral heritage.

From Monday 26 April the museum is open again.